A BANK REACHES OUT TO THE HOMELESS: ALTERNATIVE GRAND PRIX

It should be fairly easy to open a bank account. After all, as one of the interviewees in Wunderman Thompson’s moving case study points out, even children can have bank accounts. But just try to open one if you’re foreign, or jobless – or homeless.

Mike Watson, creative director at Wunderman Thompson London, remembers how hard it was to open an account when he moved to the UK from South Africa 20 years ago. “I struggled to open an account, even though I had savings, so for a while I had to use my girlfriend’s account. At the time I didn’t yet have a job, so they basically said, ‘No job, no bank account’. You can get stuck in that cycle.”

Many years later, longstanding client HSBC UK wanted to do something about homelessness. It’s a huge problem – at the time, data from the homeless charity Shelter suggested that one in 53 people in central London was technically homeless. (In the UK as whole, the figure exceeds 280,000.) Allowing homeless people to open bank accounts, using an address provided by Shelter, was part of a potential solution.

Because without a bank account you can’t get paid, you can’t pay rent – you barely exist. 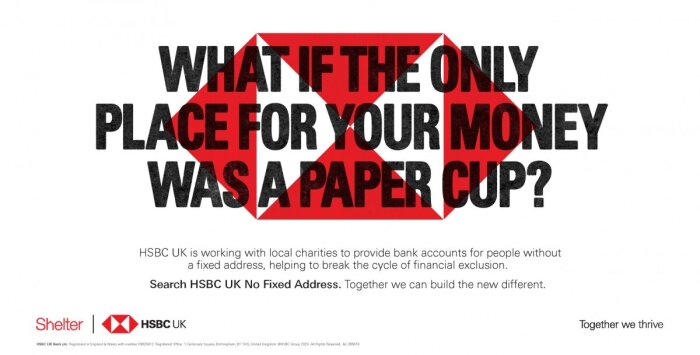 Mike recalls: “HSBC have a team called FIV, which is their Financial Inclusion and Vulnerability Team, and we discovered they were already running a trial of this bank account. We found the idea really interesting and thought it was something that we could amplify and expand on. In fact we were worried that if we didn’t do that the trial might die, which is what trials tend to do in any heavily regulated industry.”

The agency spent four years building awareness of the project. Then lockdown – which forced everyone to stay at home – made homeless people even more visible. An outdoor campaign during that period involved placing posters in bus shelters, which made it look as if homeless people were sheltering in them. The sites were carefully chosen based on the rates of homelessness in each area and the proximity to an HSBC branch that offered the service. The number of “no fixed address” accounts grew by 52 per cent – and donations increased too.

According to the last figures available, around 2,000 homeless people have opened accounts. This sounds modest until you take into account that most homeless people rely on the goodwill of friends, moving from sofa to sofa. The number of people sleeping rough on the streets is closer to 6,000 (as of March 2020).

The campaign is also something of a turnaround for HSBC UK. Although a long-running campaign had positioned it as The World’s Local Bank, in the UK it was perceived as distant and vaguely foreign (its initials derive from The Hong Kong and Shanghai Banking Corporation), even though its was founded by a Scotsman. More recent campaigns have aimed to bring it closer to home. And now it’s aiding Britain’s homeless.

The bank was perceived as vaguely foreign...and now it's helping Britain's homeless. 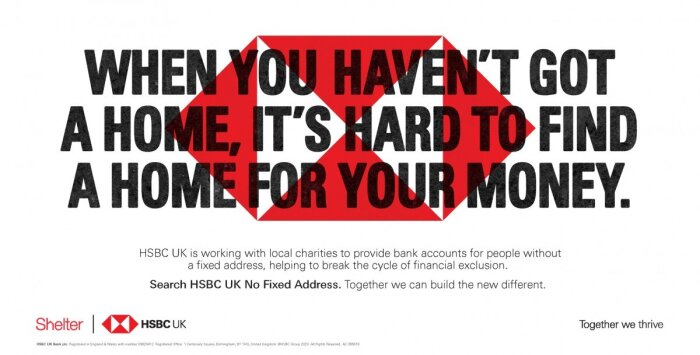 Having said that, Mike insists this was not a brand image campaign. “It was a group of people at the FIV team wanting to do the right thing. Once we’d amplified it and it started to gain traction, even the naysayers could see why they should get behind it.”

He adds that the account is also there to help people escape abusive partners, or modern slavery. Refugees and asylum seekers can apply as well. “In a way the bank is proving that it’s not just a big faceless institution. Certainly it’s big – but big enough to make a difference.”

He praises the client for taking a risk – something that isn’t always associated with banking. “The team over there are incredibly brave and willing to stick their necks out. They allow us to push them, but they also push us.”

Fortunately, not all circles are vicious.