DESIGN PLUS: SEVEN SOCIETAL TRENDS THAT ARE IMPACTING DESIGN 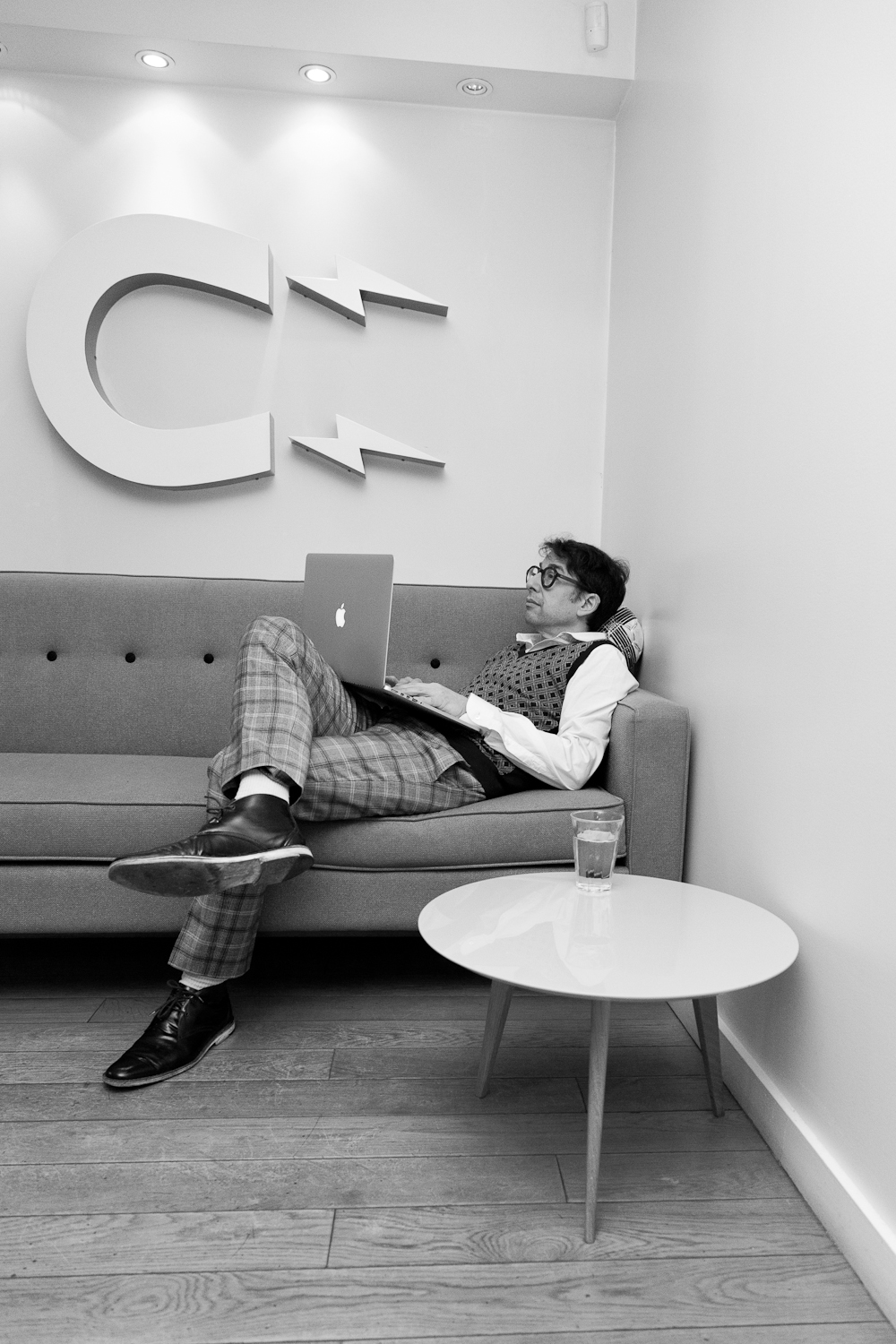 For somebody who was born in Topeka, Kansas, Aaron Levin has left an impressive mark on some of the leading names in French print and design. He arrived in France at the age of 13, although he still doesn’t feel entirely French.

“I feel stereoscopic,” he laughs. “I think everyone who has a double or triple culture see things in relief, because they have different yet converging points of view, while people of a single culture tend to see only one image.”

Fascinated by the press ever since a lesson at school transported him behind the scenes of a newspaper, he asked for and actually got a job as a designer – and later art director – on the iconic French title Libération.

His subsequent career took him to EuroRSCG Design, Landor, Dragon Rouge and BETC Design, before he became an independent designer. Since 2006 he’s worked with Curius as a creative director while retaining his independence – which enables him to teach a Master's in his first love, typography, as well as design at the ECV Paris design school.

“Although I have a special relationship with Curius and can often be found working here, I’m not anchored to one place. I have other clients too. Being fluid gives me an exterior view, which I think allows for more creative freedom.”

As Aaron observes, this leads us neatly on to his first trend. (The following text was adapted from our conversation.)

The agency Theory of Fictions has a habit of reaching out to students when faced with a new challenge, because they bring fresh answers. One of its more recent questions was: “What defines our era?”

The answer was TRANS. Transgender, trans-cultural, transgressive. It is a time of eroding borders; blurring frontiers between the sexes, between the real and the virtual, between work and life.

An obvious example of the latter is WeWork, which has evolved from providing shared office space to crèches and apartments. (Its slogan is “Make a life, not just a living”.) Non-gendered skincare and clothing are also becoming more common. And BBC2’s fluid new identity – expressed by many different artists – won a prize at Cannes. When the BBC starts to behave more like MTV, you know the world is changing.

A generation of kids who’ve grown up with a game controller in their hands has now entered the workplace.

A generation of kids who’ve grown up with a game controller in their hands has now entered the workplace. As many as 50 per cent of them – a conservative estimate, says Aaron – have never read a physical book. But they’ve acquired knowledge and survival skills in an infinite universe largely free of pre-determined rules.

They’re also used to sharing ideas and images with peers across the world, which gives them an alternative view of belonging and geography. They’re attracted to trans-national brands that spring from the digital space. Like a global tribe, their references are similar, no matter where they are.

But with an infinity of images at their disposition, their grasp of context is limited: notions of copyright, provenance and real or fake are as blurred as their borders.

They’re also constantly being seduced by those who crave their attention. This has created a challenge for potential employers, who must now also play the seduction game, in terms of branding as well as offering. The balance of power has flipped.

An alternative to physical books that might appeal to this cohort also won a prize at Cannes: Insta Novels from the New York Public Library, which reimagined classic books for Instagram.

Until recently geek culture had a strongly masculine bias, but there is a gradual shift. As Aaron points out, the scientist behind the algorithm that brought us the recent breathtaking image of a black hole was a woman.

See also Stabilo’s award-winning campaign highlighting the overlooked women of science, including those who worked for NASA during the Apollo program.

For Aaron, the haunting black hole image also symbolises the ambiguity of technological advances: wondrous yet potentially catastrophic. Technology always brings with it an element of risk: will AI steal our jobs?

With this in mind, many of today’s start-up entrepreneurs feel driven to introduce a strongly ethical element into their business plan right from the start. Aaron calls them “extrapreneurs”. He cites the example of shoemaker Toms, which donates a free pair of shoes to a child in need for every pair it sells. Its slogan? “Stand for tomorrow.”

Brands may come under pressure to use sound responsibly.

Branding and UX (user experience) were long seen as separate disciplines. One agency would create the identity of a company, while another would work on how users interacted with the brand in the digital world.

Aaron explains: “Digital agencies had a UX-centric approach, focused on the user, while designers were focused more on the brand. With the result that when the pair came together, there was a collision.”

The initially brand-centric Curius took the decision to bring UX design into the agency, ensuring a seamless overall experience. One example is the agency’s work for Greenweez, an online store selling organic products. A smoother and more coherent UX design resulted in a 26% increase in sales.

5. MOBILITY IS A FOUR LETTER WORD

Bird, Lime, Bolt and now Circ – the electric scooters that are invading our cities all have four-letter names. Just as the naissance of search was heralded by a double O – Yahoo, Google – four is the magic number for the purveyors of light electric vehicles.

But why? Aaron traces the trend back to Uber (whose vehicles, it must be said, were largely of the four-wheeled variety), followed by Lyft, Jump and so on. “The names have to be catchy, easily visible as an app on our phones – and also on the steering column of the scooter itself,” he points out.

For now citizens have a love-hate relationship with the scooters. Although they represent liberty and clean commuting, they also clutter streets and provide an additional obstacle for motorists; not to mention risks for their users, who blithely whizz along without a crash helmet.

The latest somewhat unbelievable entrant to the market is Cangoroo, which plans to bring shared pogo-sticks (yes, you read that right) to “every street in the world”. A name change may be required first.

The scooters mentioned above often communicate with their potential users via a series of beeps: a slow beep when they’re reserved or a faster and more desperate one when they’re lying painfully on their sides.

As we’re constantly in motion, and more likely to pay attention to our headphones than our screens, sound is playing a larger role in our lives. Aaron observes: “We have an increasingly cybernetic relationship with machines, and of course it’s more efficient if they communicate by sound rather than writing to us. But that’s also raising the possibility of sound pollution in our cities, so brands may come under pressure to use sound responsibly.”

From virtual assistants to podcasts, consumers and brands will have to decide how they wish to navigate this soundscape. People are becoming isolated in aural boxes, wearing their ear buds semi-permanently. Are they cutting themselves off from friends, family, or potential danger? Aaron suggests smart ear buds that recognise certain voices and sounds but block out others.

Sound can also aid the motion-impaired. The Design Grand Prix winner at Cannes, Google’s “Creatability” platform, aims to make creative tools accessible for those with disabilities. Many of the solutions are based on sound.

Every project, no matter what it is, can be resolved by a design approach.

The way we see the world, particularly colours, has been modified by our interaction with screens. The old world of subtractive primary colours – cyan, magenta, yellow and black – was exploded by the arrival of the TV, which offered a far larger spectrum. Many of the colours we see on screens exist purely in that realm; they have no equivalent in nature. But our evolved brains are now more excited by these than the comparatively duller traditional hues.

“This poses a problem in design,” says Aaron, “because it’s increasingly difficult to create a coherence between colours on a screen and colours in printed materials. So which should you emphasise? There are many brands today that exist 80% on screens and only 20% on paper. Plus it’s often a difficult discussion with clients because they don’t understand why we can’t replicate certain colours on paper.”

A similar problem is caused by synthetic images, generated by algorithms, which are equally impossible to replicate on paper. Brands that exist purely in the virtual world can’t be far away. And with the arrival of immersive virtual reality, there’s a danger that human beings may soon find synthetic worlds more attractive than real life.

“Everything that Man can imagine, he’ll eventually find a way of doing,” says Aaron. “Supposedly physics makes time travel impossible, but it might be possible to create virtual versions of the past that are indistinguishable from reality.”

In this hyper-fluid, multi-platform world, brands are obliged to continually create content – which is good news for designers and communicators. It may worry consumers, who are already bombarded with information, but the sheer pressure on brands to stand out could raise the bar of quality even higher. One thing’s for sure, says Aaron, design has a bright future.

“In the past we were somewhat side-lined, but in today’s society design thinking infuses almost all our interactions. Every project, no matter what it is, can be resolved by a design approach. That’s why I believe design should be taught to children from a very young age, because the world will benefit from the result.”