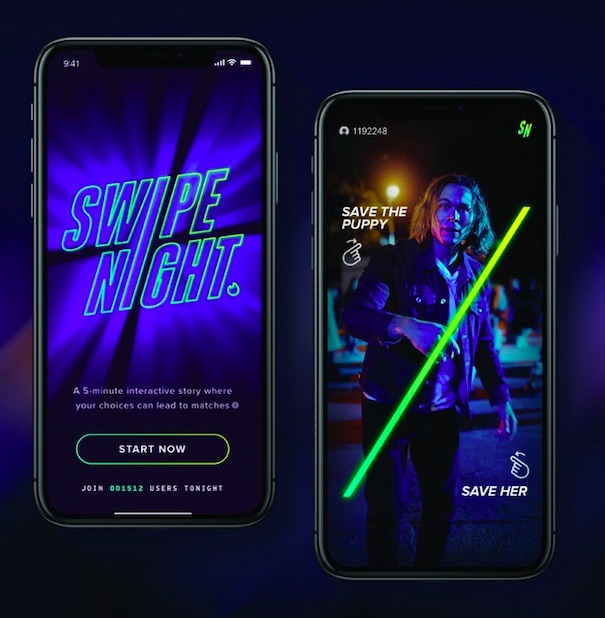 How and when did the idea for the project first surface? Was there a brief or was this a concept you approached Tinder with?

Tinder came to us with a brief to connect with their growing Gen Z audience, and to breathe new energy and cultural relevance into their brand. We contemplated using paid media to shift perceptions, but realized that the biggest channel Gen Z turns to every single day – with over 50 million users worldwide and 1.6 billion swipes a day – is Tinder itself. Together with the Tinder Product Team, we came up with the idea of creating an experience inside the app that would provide entertainment and a way to make their connections more meaningful.

Who were the key people who made it happen, both technically and creatively? Did you have help outside of the agency?

We put a big team together from product engineers and marketers at Tinder to our production partners at M ss ng P eces, Cabin Editing Company, Moving Picture Company, and Q Department Audio. So yes, lots of help outside of the agency. Oh, and a videogame designer, two TV writers, and our director.

How did the project evolve from the initial idea to the interactive extravaganza that it became?

We wanted to create entertainment with purpose – entertainment that gives Gen Z a more meaningful way to match on Tinder. Gen Z singles craved a matching experience that went beyond surface level profiles, and allowed them to connect with others on a deeper level – but without getting too serious. Most dating sites have lengthy compatibility questionnaires and complex matching algorithms. But we thought about the adage “actions speak louder than words,” and decided to create content where you make a series of choices that drive the story forward, and those choices impact who you can match with. It’s interactive entertainment designed to engineer compatibility.

How did you manage this technically, given the many different options available to players? You must have filmed hours of footage!

There were a lot of white boards! We mapped everything out in the writer’s room so that we could make as many scenes feel as unique as possible without spiraling into an infinite web of choices. When you jump into the experience, you might only play for about five minutes per episode, but we filmed about 10-15 minutes worth of footage to do that.

How did you promote the event to ensure that a maximum number of people took part? I saw that you got a lot of media coverage upfront.

Prior to the release of the first episode, we did PR with large publications to get the word out. We also casted influencers in the experience itself as cameos and used their social media channels to announce the event. Then we worked with Snapchat to create the first-ever swipeable AR filter. We created paid social ads as well as ads within the app itself.

Why did you decide to show it in 5-8 min episodes, on Sunday nights, rather than allowing people to “binge play” the game?

We ultimately decided that releasing each episode one at a time would create more anticipation and excitement – a water-cooler moment of sorts. We felt that this would create more energy around the experience because the entire experience would last for a month rather than just one Sunday.

What was the most difficult and challenging moment of the whole project?

There were a lot of challenges with creating this experience. Everything from the writing to the engineering to the shooting itself had its difficulties. But when we look back at the project as a whole, the most crucial moment was just the decision from our clients and partners to actually do this thing. It had never been done before – so there were a lot of risks. Overcoming those concerns and choosing to believe in an idea is no small feat.

THERE'S NO BUSINESS LIKE NEW BUSINESS: CHARLIE MARTYN
Interviews
A CLOSER LOOK AT "THROUGH YOUR EYES"
Interviews
BEHIND THE MOLDY WHOPPER: THE BACK STORY OF THE TRIPLE EPICA GRAND PRIX
Interviews
WHAT EPICA AWARDS JURORS WANT
Interviews
See more articles