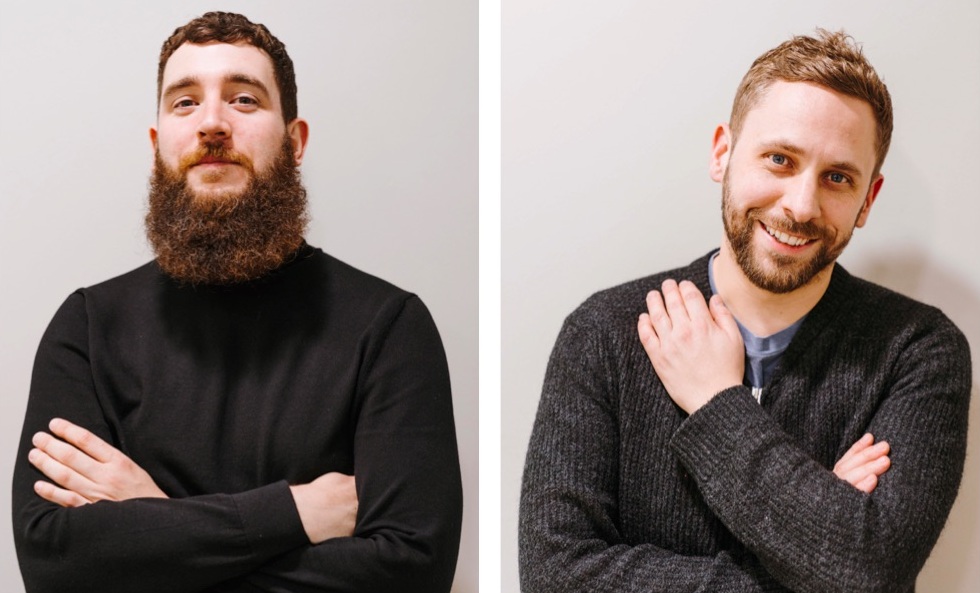 Christopher McKee and Richard Morgan. The creative duo and their client are changing the game when it comes to promoting TV sport.

They told people to cancel whatever they were doing – including getting married – to watch a football match. They used an AI to predict the results of the Champion’s League and sent a “script” for the coming season to soccer fans – who were outraged. And then they invaded one of the last bastions of masculinity, the British pub, and turned it into the home of women’s football. They are Wunderman Thompson UK and its client BT Sport.

I arrived at the agency for my chat with creative directors Christopher McKee and Richard Morgan drenched and somewhat miserable after being caught in a torrential downpour. But the guys’ cheery enthusiasm soon lifted my squelched mood.

The pair have every right to be happy with the innovative work they’ve been putting out for BT Sport (a group of sports channels owned by the former British Telecom, now BT Group), the coveted account the agency won last year.

The idea that clinched the deal was “Unscripted”, based on the cheeky premise that it might be possible to write a script for the soccer season with the help of a computer. Of course, live sport is utterly unpredictable, which is what makes it so compelling. The payoff said it all: “You can’t write it. Watch it on BT Sport.”

Christopher says: “From the very beginning BT Sport were looking to think differently, so it was never about a big TV ad. They wanted something that was disruptive and left-field. As often happens in those circumstances, the budget was a lower, but within those parameters we were forced to innovate.”

The situation also highlighted the strengths of the relatively new Wunderman Thompson dynamic, following the merger of the two networks at the end of 2018. “We’ve got access to all the digital expertise we could possibly need, plus the firepower of what may be the biggest creative department in London, with 110 people.”

Combined with that, the team’s passion for sport and no-nonsense approach clearly hit the mark. “We were pretty sure we’d won the business, but we still hadn’t been officially told. Then in the midst of creating ‘Unscripted’ they came to us and said, ‘We want to do a Champion’s League brief.’ Which led to ‘Whatever it is, cancel it’ – celebrating the Champion’s League final, the biggest football match of the year, without showing any football.”

Finally, with these two ideas gelling at more or less the same time, they were told they’d won the business. Richard says: “It was quite an organic process. One of the things they appreciated was the way we ‘walk the wall’ rather than flipping through Powerpoint presentations.” 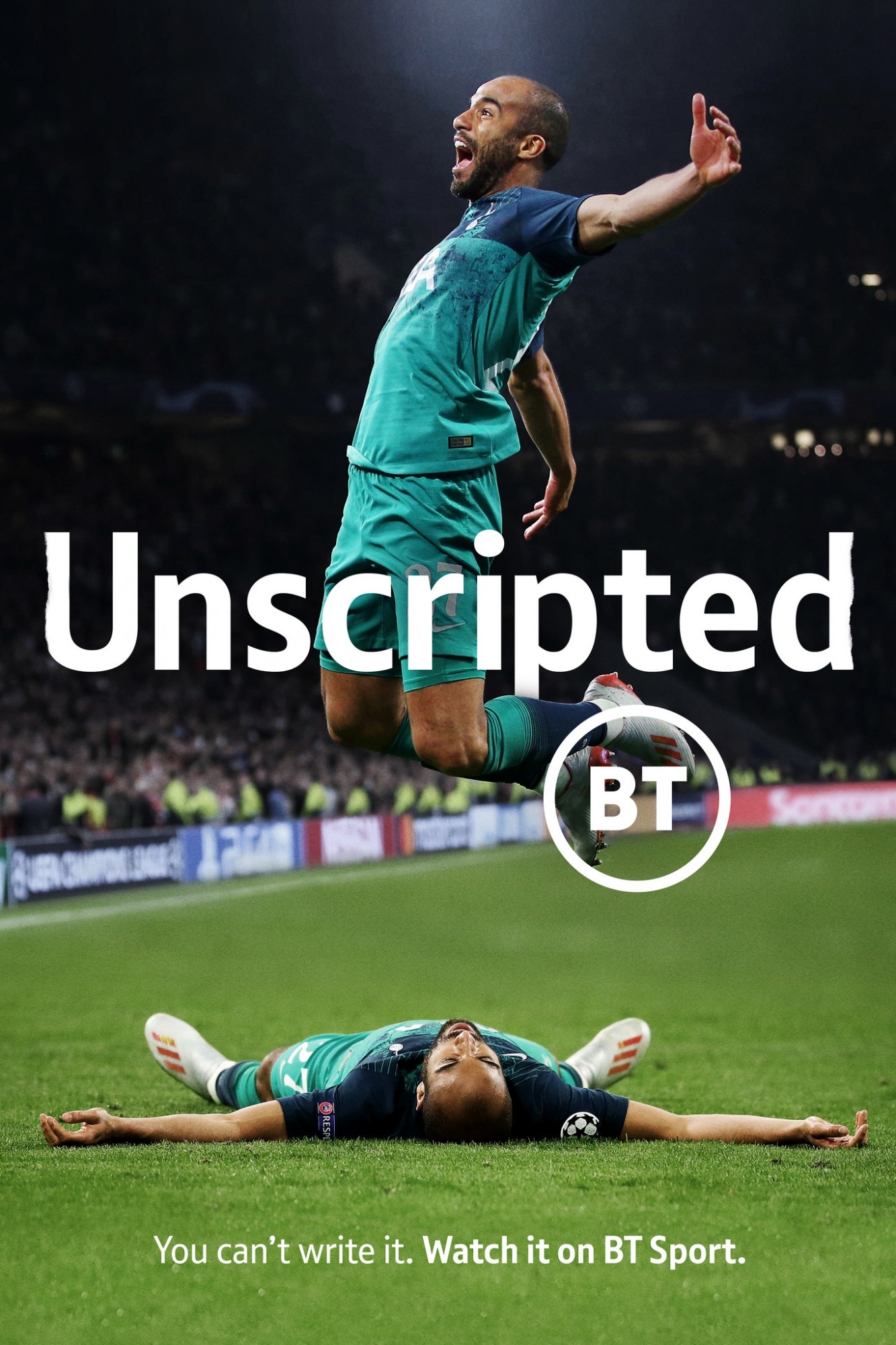 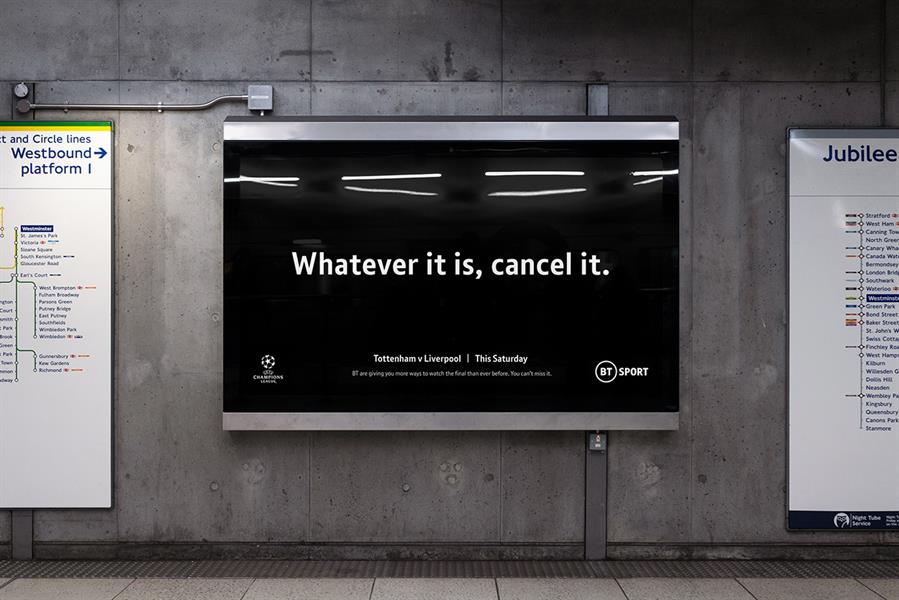 What he means by this is that the team literally displays its ideas on a wall – conventional presentations are banned. And creativity always comes first, adds Richard. “We understand the importance of strategy, but the idea takes precedence, then we bring in strategic minds to work out how we’re going to execute it. BT Sport really bought into that ‘creative first’ mentality.”

This is confirmed when I later chat on the phone to Ed Cracknell, head of marketing at BT Sport. “Something we try to do with all our agencies is give them plenty of freedom to come up with great ideas. Plus we encourage them to be provocative. We want to give them as much leeway as possible before we have to say they’ve gone too far.”

Putting the idea ahead of strategy allows the agency to be media agnostic. In other words, they come up with a great idea and then decide how it’s going to reach an audience. “The good thing about being Wunderman Thompson is that our choice of channels is huge, so no idea is off limits,” observes Richard.

“That’s what we absolutely loved about ‘Unscripted’,” says Ed Cracknell. “When we saw it, we knew it was the one. It was all about the idea, not the channel. Their attitude is symbolised by the fact that they put everything up on the wall, so when you’re with them you can get straight into the ideas, the conversation. For us that was a real game-changer, along with the quality of the ideas themselves.”

Ironically, one of the reasons ‘Unscripted’ won a Gold at the Epica Awards – which is of course judged by a jury of journalists – is that it’s something you want to write about. It’s funny and daring: a good story. Christopher says: “We always try to create a moment in culture. That’s the sweet spot of an idea for us – it needs to be something that people care about and talk about actively.”

Ed agrees that BT Sport relishes campaigns that generate conversations. Which brings us to the Red Lioness campaign. The agency needed to find the way of getting the public – everyone, male and female – behind women’s soccer and especially England’s national team, the Lionesses. One place men have always gathered to watch football is the pub. But they were about to have company.

“Pubs didn’t really commit to showing soccer, particularly the Women’s Super League,” says Christopher. “So we came up with the very simple idea of turning a pub, The Red Lion, into The Red Lioness.”

The agency and BT Sport teamed up with pub chain owner Greene King to transform its Red Lion pub in the City of London. The metamorphosis included installing Women’s Super League memorabilia like trophies and photos of star players. “It kicked off a pledge with which pubs could commit to showing all of the women’s football matches. So far nearly a thousand pubs have signed up – whereas no pubs had ever committed to showing women’s football before, so it was a big step change.” 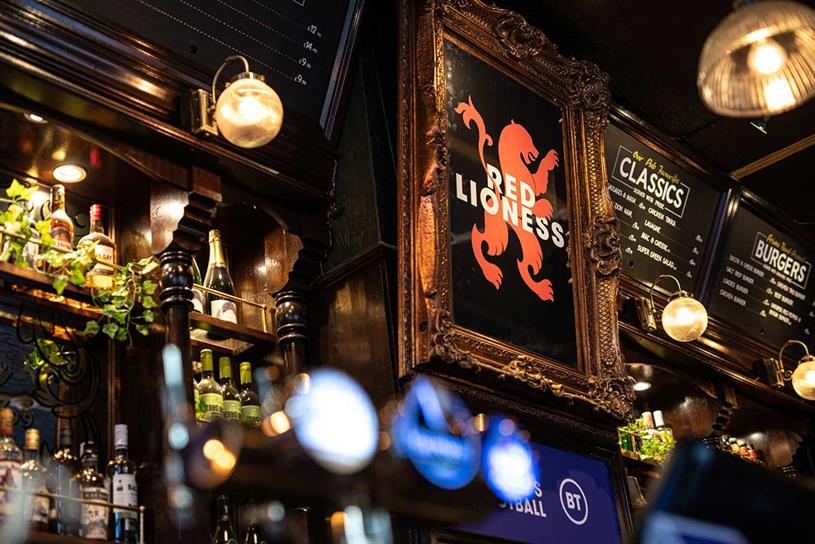 Ed reveals that the idea was proactively suggested by the agency. “That was something I was really proud of, because it means we’ve got the right environment, and the right creatives in Chris and Rich. It was a really bold statement that football is football.”

The campaign is both empowering and uniting. As Richard says, the pledge is not just about showing women’s football. “It was far more than a cosmetic change. It set out to make pubs more inclusive, right down to baby changing facilities. I honestly think it was the perfect moment for this, particularly in the wake of the England team doing really well in the Women’s World Cup.”

Once again, a different type of campaign – led by culture. And backed by a client apparently unafraid of taking risks. “I think that’s been an evolution,” Ed says. “I doubt there’s ever been a marketing team without budget or time constraints, but at BT Sport we’ve really focused on how creativity can improve our effectiveness. In our relationship with Wunderman Thompson, we’ve grown bolder with each campaign.”

It has to be said: a winning team.