Director and animator Manddy Wyckens and her client Feliciano Robayna talk about “Taming Giants”, the awe-inspiring new film for running shoe brand On.

Until a few days ago I’d never heard of Swiss running shoe brand On. Since then I’ve learned that the high-performance yet stylish shoes are gaining a cult following (Roger Federer is an investor) and that the brand’s marketing is as innovative as its footwear.

Take its latest gem of content: Taming Giants. The film captures trail running couple Katie Schide and Germain Grangier, partners in sport and life, as they take an epic journey across the Alps, traversing 188 kilometres and two mountains.

The story would be spectacular in its own right – but it’s raised to greater heights thanks to a sumptuous blend of film and animation. Lean, fluid and elegant, the animation by Manddy Wyckens gives the film a timeless quality, so when the mountains morph into giants, they flow into the operatic narrative. No coincidence that they were created by an artist who’s honed her style like a sculptor.

“I think you always have natural inclinations, but you need time to listen to them and explore them,” reflects Manddy, who was born in France but is now based in London at Studio AKA. “For me its been a process of leaving behind some of the things I’d learned and focusing on others that spoke to me more strongly. A long process of unloading.” 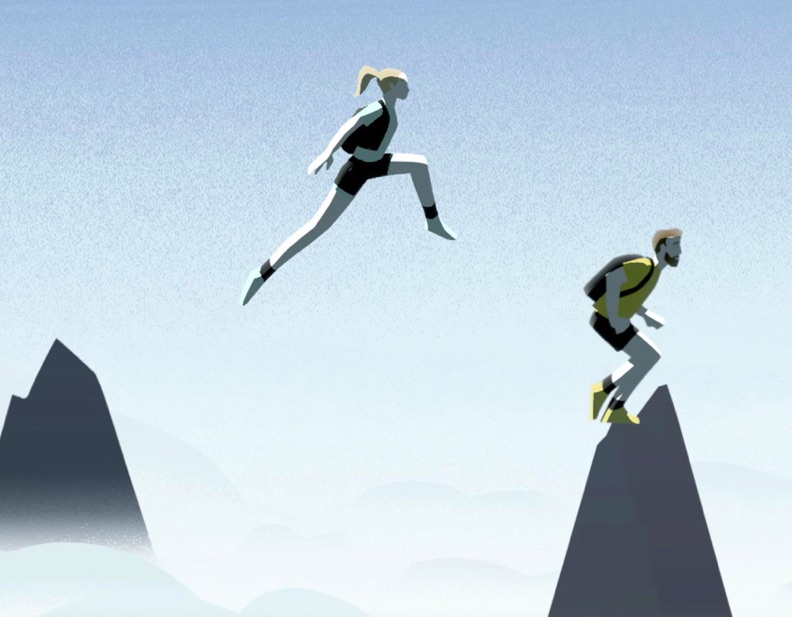 A tale of two films

Manddy came from a modest background where getting paid to create art was not on the agenda. But once she’d decided on her path, she passed the tough entrance exam for the Gobelins visual arts school in Paris. The final year saw her in California at Calarts. Her CV is full of impressive names, including DreamWorks Animation and Netflix.

“I came to London on impulse,” she says. “But it turned out to be a good decision, because it gave me access to positions with more responsibility.”

In Paris it’s easy to get put in a box, but she found that London offered opportunity, diversity and flexibility.

When On came to Studio AKA, the studio launched its usual process of allowing all its directors to propose a treatment for the film. “It was in the middle of lockdown and the idea of running and mountains felt extremely appealing,” says Manddy. “Plus I’m a runner, so I was extremely motivated. In the end I suggested two treatments, one focused solely on the giants, and another that was very graphic but also calming, with lots of nuances of blue, which was close to the final result.”

Merging the live action and animated parts of the film was harder than it looks in the smooth completed version.

Manddy recalls: “I started work when the athletes were only on the second or third day of their trip, so I didn’t have much to go on – I looked at their Instagram images. I also had a map of their route and some research into the atmosphere. But we had to wait and see what the weather was doing each day, so we could integrate it. I had very little idea of what the final film would actually look like.”

Although the animated film was a complete artwork in itself, it was divided into sections with different colour tones – each reflecting a stage of the journey – that would enable them to be dropped into the relevant parts of the live action drama.

Closely following the process was Studio AKA’s client at On – head of sports marketing Feliciano Robayna. Feliciano has a background that combines creativity, sport and fashion, having worked for 180 Amsterdam, Adidas and Phillip Plein, among others.

He’s used to dealing with athletes, but filming extreme running duo Katie and Germain in the midst of a pandemic was a unique challenge. After developing ideas with the independent creative director Simon Brotherson, the original plan was to shoot three races as well as the mountain hike – but the races were cancelled and it wasn’t clear that the hike could go ahead.

“That’s when we came to this idea of an animated, fairy tale version of the story. We thought that if we did get live footage, we could marry it with the animation – and if we didn’t, we’d still have a beautiful story about Katie and Germain’s love for mountaineering and for each other.”

Manddy’s 1920s, jazz age treatment of the idea hit the spot right away. “She did some illustrations even before Katie and Germain had left, so it was super interesting to see some of the things that Manddy had concepted against the footage we eventually got. It really felt like one cohesive world.”

It’s no means the first time On has surpassed typical sports marketing. It specialises in projects that are emotional, authentic – even political.

“Being a challenger brand, we know that our sports marketing activations have to work that much harder to get people’s attention,” says Feliciano. “We’ve always honed in on the territory of the enduring human spirit. The way we like to put it is, ‘When switched On the human spirit knows no limits’. That’s at the heart of all our briefs.”

It was super interesting to see some of the things that Manddy had concepted against the footage we eventually got. It really felt like one cohesive world

For example, the film RUN followed the Athlete Refugee Team: athletes from South Sudan, Rwanda, Somalia, Morocco and the Congo attempting to quality for the Olympic Games in Tokyo.

Another film, Superfrau, highlighted Swiss athlete Nicola Spirig, who won a Gold medal five months after giving birth to her third child. The message was that women should never have to compromise between being an athlete or a mother.

For each project Feliciano tends to go directly to the creative talent rather than through an agency. It’s partly thanks to his address book: a lot of creatives he knew from agencies are now full time film directors or freelancers. “When I arrived at On we didn’t have a huge budget, and going down the traditional route of agency retainer fees wasn’t something we could think of doing. So it tends to be a case of me getting in touch and saying, ‘I’ve got a brief I think you’d be great for.’”

With inspirational marketing sitting alongside high-performance products, it may not be long before On is more than a challenger brand. Feliciano says: “On is the perfect synchronicity of Swiss precision, premium engineering and design. With many running shoes, when you wear them with jeans you look kinda like Jerry Seinfeld – not fashionable. But you can wear our shoes with jeans and then wear them to the gym or go for a run without skipping a beat.”

Whether you’ll be able to scale a couple of mountains the next day is questionable – but you should certainly watch the film for inspiration.