But that’s not the only reason KLM has been making headlines of late. Earlier this year, it launched the Fly Responsibly campaign, which boldly challenged frequent travellers to fly less. And encouraged other airlines to adopt the same discourse too.

To find out more about a remarkable few months for KLM, we spoke to Boet Kreiken, EVP customer experience at the airline, and Esther te Pas, managing director of DDB Unlimited.

KLM is celebrating its 100th birthday. What would you say are the characteristics that mark the brand out from other airlines?

Boet Kreiken, executive vice president customer experience, KLM: KLM is the first commercial airline that is still flying under its original name. And it’s an airline that really cares for people. It’s also a brand with a rich heritage – but perhaps most of all it’s a pioneering airline that has been at the forefront of aviation for the last 100 years, connecting people at more than 160 destinations worldwide. By cherishing our customers, embracing innovation and taking the lead in sustainability, we have created a beloved brand and a beautiful KLM family.

I love the way the daughter in the film ends up as the pilot and captain of the plane. How much is that based on a true story or stories at KLM?

Esther te Pas, managing director, DDB Unlimited: The campaign film is not an actual true story, it’s a scripted narrative. But it was 100 per cent inspired by real examples of families and multiple generations who work within KLM. There are a surprising number of multigenerational stories at the airline, where two and sometimes three generations have worked there.

In terms of the female pilot, more and more women are training as pilots and being recruited by KLM. However, there are definitely more men than women who decide they want to become pilots. Maybe this campaign will inspire future female pilots! 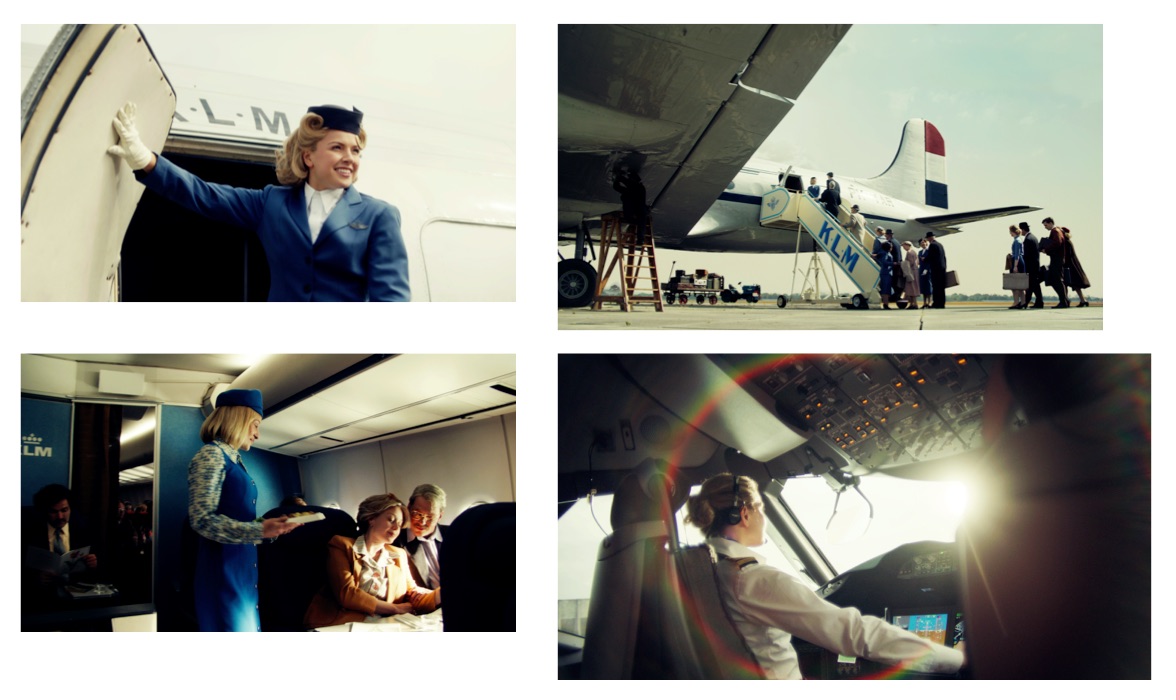 Can you briefly talk us through some of the attention to detail that went into the film?

Esther te Pas: The most challenging aspect was getting all the historical details right. Of course, when you want to shoot a period piece like this, you want to ensure everything is accurate and appears as it was back in the day. The film tracks KLM’s evolution from 1919 to the present day and features classic airplanes such as the Fokker F.II in 1934, the Douglas DC-4 in 1949, Boeing 747 in 1975 and ending with the brand-new Boeing 787-10 Dreamliner. All brought to life with the authentic uniforms, props and details from each decade.

Our team and the director, Ismael ten Heuvel, had lots and lots of talks with KLM’s Historical Centre to get every single detail right – down to the exact timings and speed of the aircraft. The art department worked closely with the historians to perfectly rebuild the interiors of the aircraft and the office where the woman has her job interview. Our stylist was so excited to go there because she could see all the original outfits and was allowed to borrow them so she could remake them. All the outfits used in the film are exact remakes of the originals. 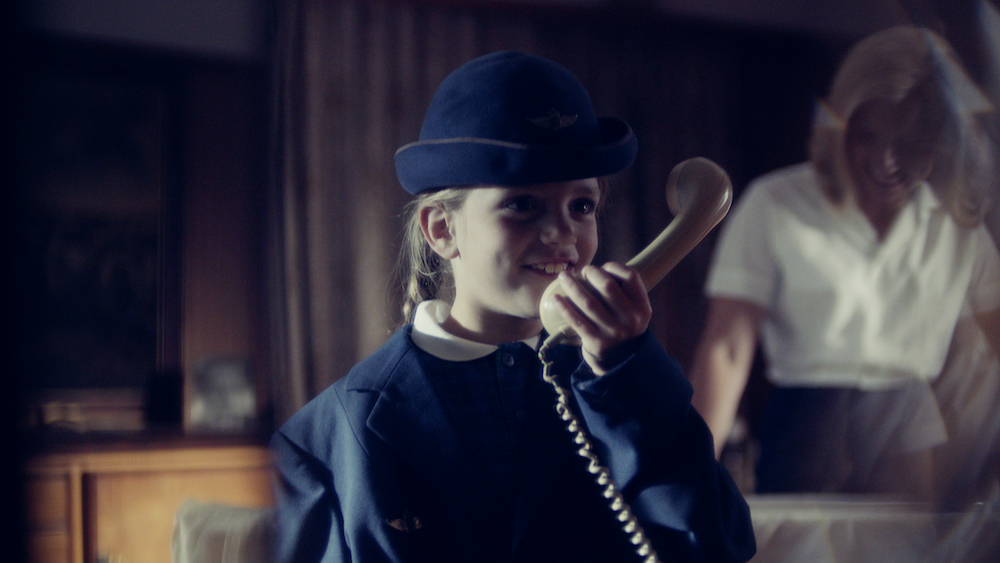 We recreated everything from the archive and had continuous contact with the historical team throughout. Even to the point of sending photos on WhatsApp when we were at the shoot to check that they had the scarves on in the right way. We were in contact the whole time and, if we were ever in doubt, we reached out to them.

It took lots of time and effort – but we are really happy with the result. The responses from the historical team were great too. When they saw the final result, they all said, “Wow, it’s amazing. It’s just like it was back in the day.” They were super impressed by all of the details.

It's also a call to individual travellers to think before they fly.

Earlier this year KLM made headlines with the Fly Responsibly campaign. From the outside it seems a very risky move for an airline to take – asking passengers NOT to fly. How did it come about?

Boet Kreiken: KLM has always been a pioneering airline – and an important aspect of being a pioneer is to look into the future. And if you look into the future, it’s inevitable that sustainability is key. We also have a big responsibility to leave a world for our children to explore. That’s why we launched the Fly Responsibly initiative. It is KLM’s commitment to taking responsibility for its own role in creating a more sustainable future for aviation. This initiative is a call to both the industry as a whole and to individual travellers.

We’re asking the aviation industry to work together to come up with solutions. We at KLM are open sourcing our best practices for other airlines to use. The airline business has become a very safe industry because we have all shared our initiatives and solutions.

But it’s also a call to the individual travellers to think before they fly. We’re not asking people not to fly. But rather we’re inviting them to carefully consider their options before booking a flight. For example, is it always essential to meet face-to-face, now that we have such advanced communications technology? Or perhaps it’s possible to get a train instead; or combine a flight and a train trip? If flying is a necessity or the only realistic mode of transport, perhaps people can help by compensating CO2 emissions or packing lightly. They could also join KLM’s certified Carbon Offset programme.

It may seem radical for an airline to ask people to consider other options than flying, but we see it as a pioneering approach to creating a more sustainable future in aviation for all of us.

What has been the reaction to the Open Letter and campaign? Have other airlines pledged their support?

Boet Kreiken: The Open Letter opened up and fuelled the conversation. It’s out there and everyone is talking about it. It’s good to see that more airlines started sustainability initiatives after ours – like Air France, which started offsetting all CO2 on its domestic flights. KLM has been at the heart of conversations around the issue.

A lot of corporate enterprises have approached us, because they are interested in using our CO2 Zero programme for carbon compensation – free of charge and free of brand – and in joining KLM’s Corporate BioFuel Program. The most recent example is Microsoft, which signed a letter of intent in October to accelerate the development of sustainable air travel.

When a UK carrier recently added more domestic flights in the UK, there was immediately an article in the Independent asking if they really should be launching more short-haul flights, referring to KLM and the Fly Responsibly initiative.

But a very tangible reaction is this: we’ve seen a 300 per cent increase on CO2 compensations from the public in the last month, due to our “Wereld Deal Weken”, or Dream Deals.

KLM has been at the heart of conversations around the issue.

Sustainability is integrated into the whole KLM operation.

What will be the next steps of the Fly Responsibly initiative?

Boet Kreiken: The Fly Responsibly initiative is not a one-off – it’s very much an on-going programme. Sustainability is integrated into the whole KLM organisation. The proof being that Air France-KLM has been in the top three of the DOW Jones Sustainability Index for the last 15 years – and this year was named number one.

KLM will continue with its CO2 reduction roadmap, working towards our 2030 targets. This means continuing our fleet renewal program, using more sustainable fuel and opening a sustainable fuel plant in the Netherlands – the first in Europe.

We are also making our catering on board ever more responsible, continuing with waste reduction and working towards a zero-emissions ground operation by driving innovations with our suppliers. Plus, we are expanding our collaboration with rail service providers and researching alternative modes of transport and aircraft and propulsion designs, for example our Flying-V initiative.

Here’s to a more sustainable future for aviation.