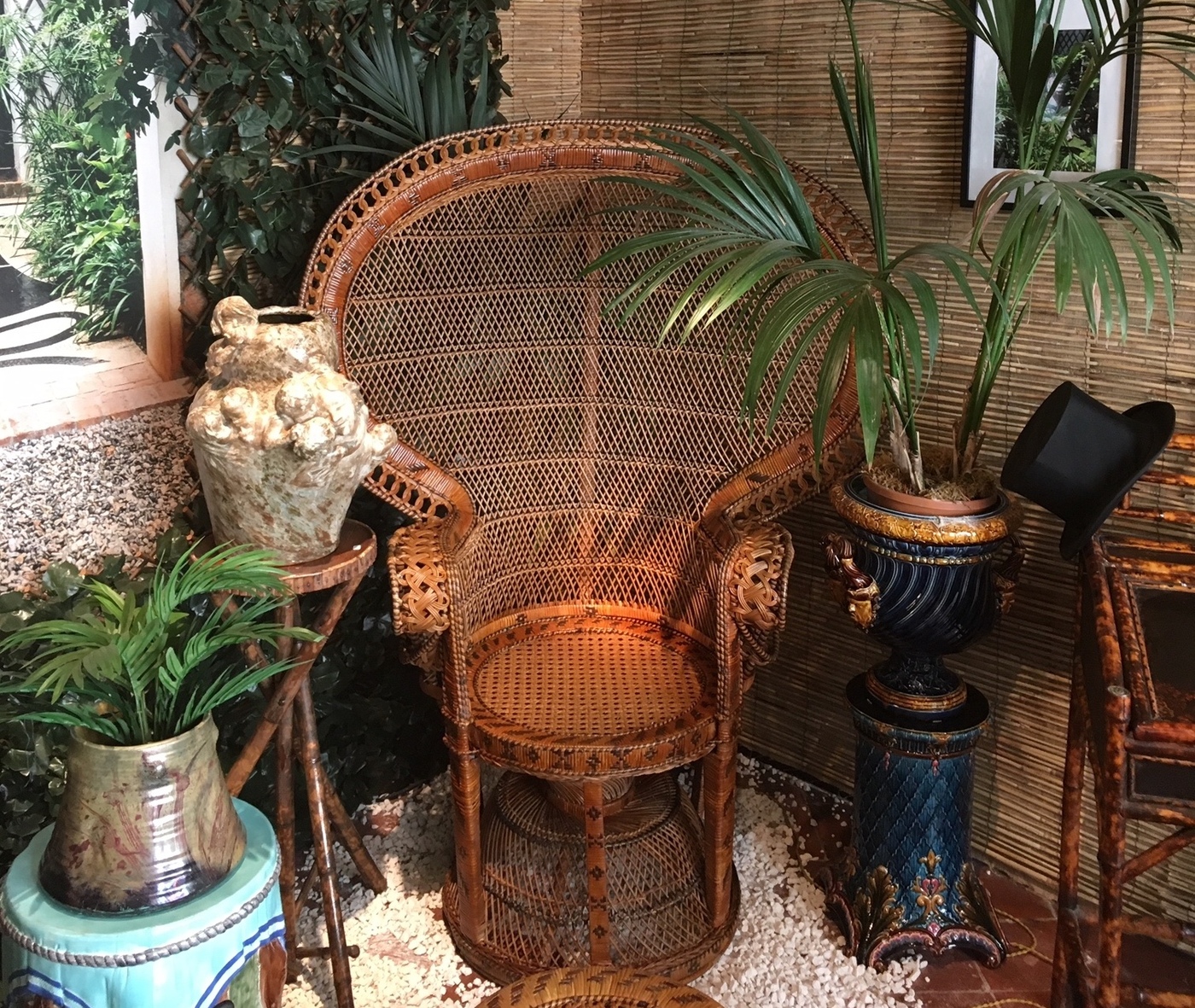 It must have seemed like a kind of paradise. At the top of 150 steps leading up from the beach, overlooking the azure Mediterranean, but with enough shaded spaces to encourage introspection, the villa Santo Sospir could have been created for a hedonist and aesthete like Jean Cocteau.

The artist, writer and film-maker was in the region shooting Les Enfants Terribles, the film of his book. The film’s star – Nicole Stéphane – introduced him to the villa’s owner, Francine Weisweiller. The pair quickly became friends, and the following year Cocteau spent the entire summer at the villa. It was a sort of love affair.

Bored yet febrile, Cocteau asked Francine if he could decorate one of the walls with a mural. One wall led to another, and pretty soon he’d “tattooed” the entire place with his distinctive art. But something else was going on too: his murals blended perfectly with the ceramics and rattan furniture that were the signature of the villa’s interior designer, Madeleine Castaing.

The result was a mid-century design classic, a home that is also a museum and an art gallery. Today you can take a tour. Well, not quite today – at the time of writing, Santo Sospir is closed for renovations. 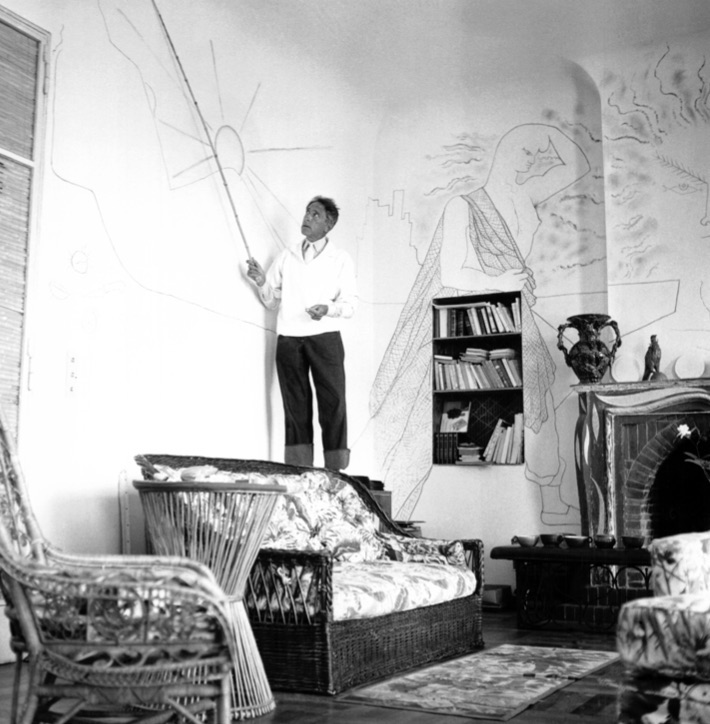 And that’s where Parisian gallery owner Laurence Vauclair comes in. Laurence specialises in antique rattan furniture and ceramics, and as such is a huge fan of Madeleine Castaing. She was also bitten by the Riviera bug in childhood.

“Every year,” she told me, “We would take the overnight train down to Théoule-sur-Mer, where we’d stay at a family guesthouse called Chez Adrienne.”

Years later, the connection remains, in the form of wealthy clients in Monaco and Saint-Tropez. It was inevitable that Laurence would end up visiting Santo Sospir. What’s more, she struck up a friendship with the villa’s steward and curator, Eric Marteau.

“When Eric told me the villa was going to be closed for two years for restoration, I had the idea of recreating its atmosphere here in Paris, so people who couldn’t go and see it could at least experience the environment,” explains Laurence.

None of the furniture or objects on show at her two galleries – one near Saint Germain, the other in the large antique market at St. Ouen on the threshold of Paris – come from the villa. Instead, Laurence painstakingly tracked down similar items. The walls are covered with strips of bamboo; potted palms create the impression of a shaded veranda.

It’s the sort of mise-en-scène Laurence is used to, having providing furniture for films like Coco Avant Chanel and Magic in the Moonlight. She’s also aware that such efforts generate foot traffic. “It occurred to us some time ago that if you want to keep the gallery busy, you have to create events,” she explained. 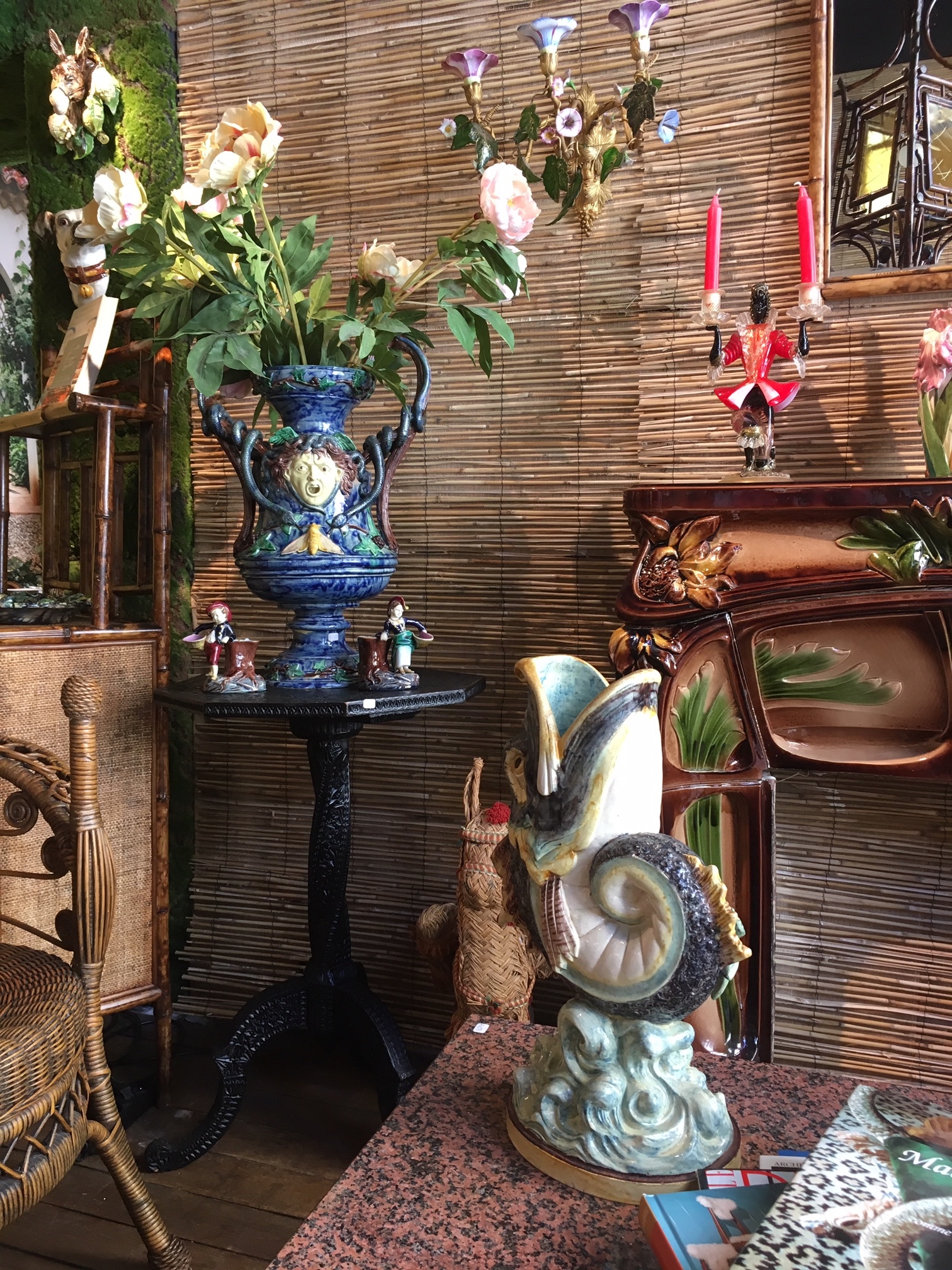 Although the 19th century rattan furniture is beyond the price range of many of us, some of the majolica pieces are comparatively affordable. Or you’re just welcome to go and take a look. “Every visitor is a potential future customer,” says the ineffably friendly Laurence. “And everyone who says nice things about us sends someone else.”

This summer, Laurence and the Galerie Vauclair are providing a vital service. In the sweltering heat of the city, they transport us to the sumptuous shade of a villa on the Riviera.

“Santo Sospir Spirit’, the exhibition, runs at the Galerie Vauclair in Paris until July 28. See www.galerie-vauclair.com