DESIGN PLUS: 30 YEARS OF THE LOUVRE PYRAMID

Much like the Eiffel Tower before it, the glass pyramid at the Louvre first generated controversy – even hatred – before gradually becoming accepted, and finally beloved. These days, a selfie in front of the iconic structure is de rigueurfor anyone visiting Paris. 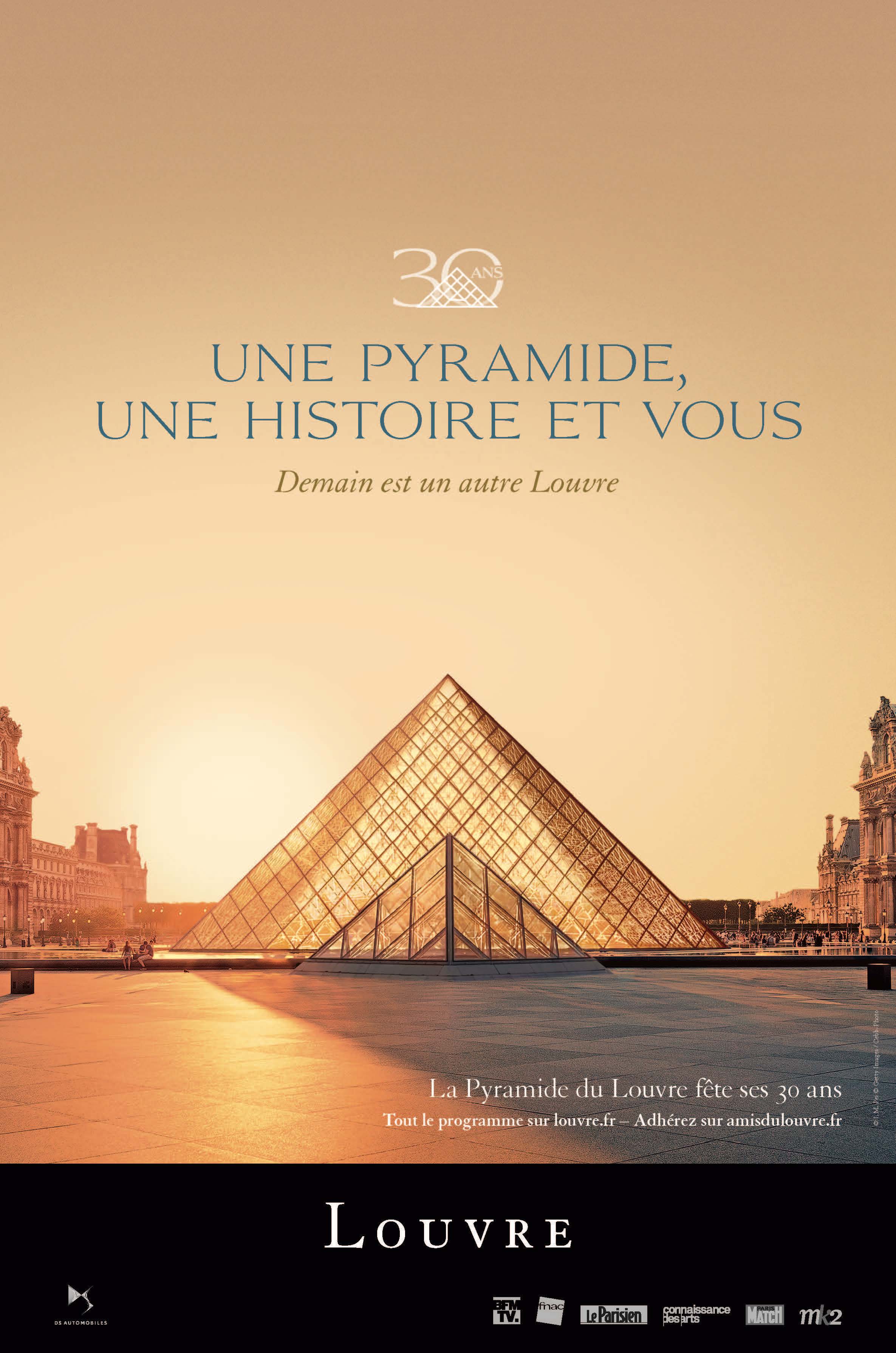 As well as being a familiar sight in Instagram feeds, it has a role in popular culture, too. The inverted pyramid beneath the main structure features prominently in the closing pages of The Da Vinci Code, where it’s said to conceal an ancient burial chamber. There’s also a conspiracy theory that the pyramid itself has 666 glass panes, evoking “the number of the beast” from Revelations. In fact it has 673.

Last month saw the beginning of a whole year of events marking the pyramid’s anniversary. These include an installation by the artist JR (now removed), a free exhibition of pyramid-themed photos from the magazine Paris Match (until May 28) and a classical music concert beneath the pyramid by the Orchestra de Paris on June 21. Plus the structure will form the backdrop for the gripping last stage of the Tour de France on July 28.

The beautiful advertising poster for the anniversary (above left) was a collaboration between the Louvre team, its agency Dream On, photographer Nicolas Guiraud and Getty Images.

One obvious question is why François Mitterrand, the French President at the time, should want to commission a giant pyramid in front of the Louvre in the first place? In fact it’s only one of his series of grands projets designed to symbolise modern Paris. (The contemporary opera house in Place de la Bastille is another.) As part of this, he reclaimed an entire wing of the Louvre from the finance ministry, which was using it as a base.

The pyramid refers to the Louvre’s impressive collection of Egyptian antiquities. For some French people, it also brings to mind Napoleon’s triumphal march on Ottoman Egypt. For others it captures Mitterrand’s pharaonic ambition and self-aggrandizement.

When I visited Paris in 1987, as an idealisitc 19-year-old, I was shocked by the way the courtyard of the Louvre had been transformed into a giant construction site. In common with many others, I found it hard to see how obscuring the sublime Renaissance façade of the Louvre with a modern glass and steel structure could be anything but vandalism.

I was wrong. The light, airy pyramid is beautiful, magnifying rather than reducing its surroundings. Its designer was the Chinese architect I.M. Pei (still going strong at 101 years old), who has spoken about suffering angry glances in the street from Parisians opposed to the project.

Thirty years on, the pyramid looks timeless yet ephemeral, a wondrous structure at the entrance to a magical world of art.

One of the things that makes the pyramid so successful is its transparency. A turning point in public perception of the project came when Pei – prompted by then Paris mayor Jacques Chirac – erected a full-scale wire frame model of the pyramid in the courtyard, so people could see the way it framed the space.

Achieving the same clarity in the final version proved problematic, however. In an interview with Architect magazine, one of Pei’s team, Michael D. Flynn, recounted: “Normal glass that’s used in buildings…has a greenish tinge to it...So if you want it to be clearer, you have to get rid of the green…Today clear glass is a no-brainer, but at that time it was less in demand. It was a lot of legwork. We used a glass that is similar to what people call ‘low-iron glass’ today. It wasn’t quite the same, but it doesn’t have any color. It was the clearest glass we could find at that time and in that place.”

The same article reveals that Mitterrand was standing for re-election in the middle of the project, so the exterior of the pyramid was completed before the interior support was entirely in place – to make the structure a done deal in case Mitterrand was ousted.

Thirty years on, the pyramid looks timeless yet ephemeral, a wondrous structure at the entrance to a magical world of art.