BEHIND THE MOLDY WHOPPER: THE BACK STORY OF THE TRIPLE EPICA GRAND PRIX

“The Moldy Whopper” won the Film, Print and PR Grand Prix at the Epica Awards – an unprecedented hat-trick. Here’s how the campaign came about. 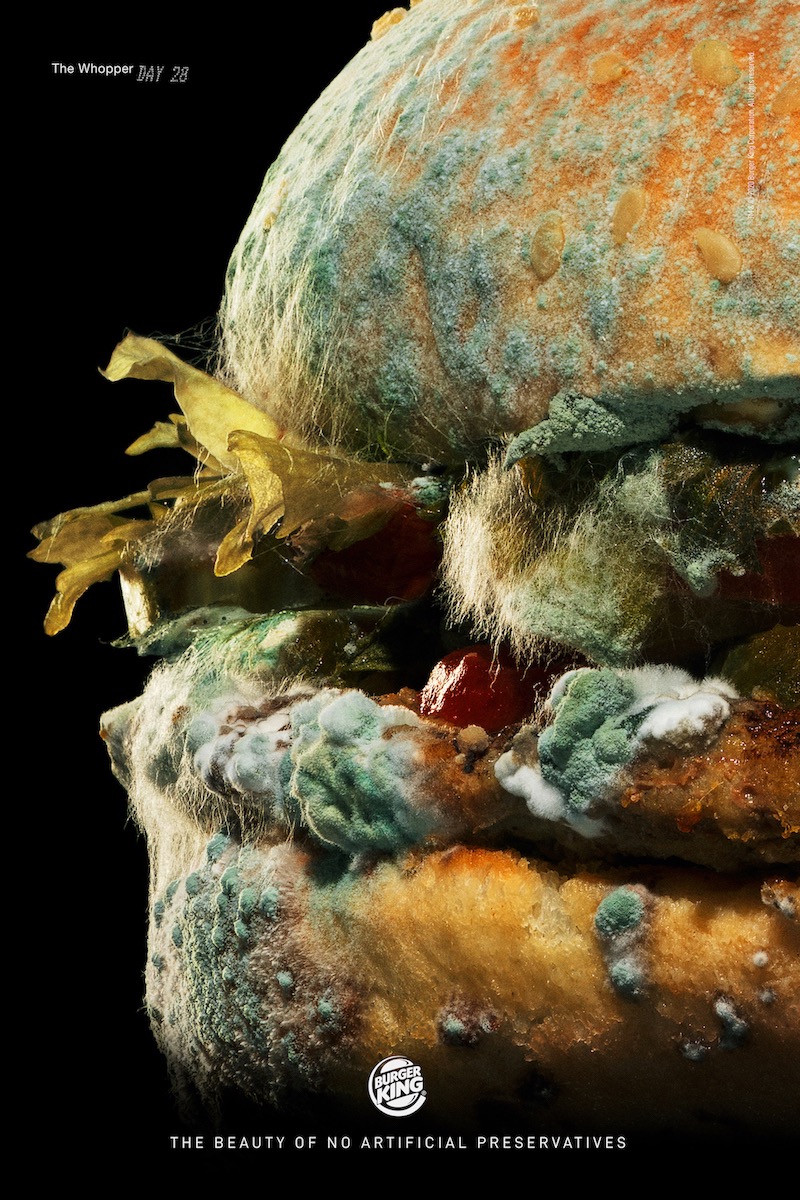 The story of “The Moldy Whopper” starts out a little like one of those movies in which a cool mastermind travels the globe hand-picking a team of talented individuals for a special mission – often a daring jewel heist. Except in this case several kilos of awards metal were won perfectly legitimately.

We should probably cast Burger King’s CMO Fernando Machado as the mastermind in this scenario. But the rest of the line-up evolved in an oddly non-linear way, and over a longish period of time. During a Zoom conversation, Pancho Cassis, global creative chief of David Miami, explained that the agency first proposed the concept in 2016.

“It was for a different brief, about fresh ingredients. Fernando loved the idea, but the product was not 100 per cent ready, so the campaign was not quite ready either. Fernando said, ‘I want to do this, and we’re on track, but let’s save it for when we’re actually there.’ In that sense, the campaign was on hold.”

Cut to four years later, where at INGO Stockholm (“The Swedish Number” – those guys), executive creative director Bjorn Stahl and his team got a brief about the first 100 per cent “clean” Whopper. The preservative-free burger was about to make its debut in Scandinavia.

In bun-shaped proof that great creative minds think alike, INGO came up with the same idea, right down to the name. When Fernando heard about it, being a fair person, he told Pancho: “You guys know each other, you get on great, why don’t you work together on it? Because INGO has a slightly different take on it; and for now the only place it can really work is in Scandinavia.”

Bjorn recalls presenting the idea to Fernando in Miami. “He told us, ‘It goes against every rule of food advertising. We have to do it!’ Then in the very next sentence he told us that David had proposed a similar idea, so he suggested a collaboration.”

But wait – there’s more. As Burger King’s offering evolved across Europe, Publicis got a similar brief and suggested yet another angle on the idea. Eduardo Marques, CCO Publicis Spain, says: “We were completely unaware of what INGO and David were up to, until we presented our idea and Fernando said, ‘Hold on, this is awesome, but…’”

So Fernando now had a trio of agencies for his special mission. “He realised that if the three of us were working on it, the end result could only be better,” Pancho remarks.

Suddenly the race was on to find the best method of creating an aesthetically pleasing moldy burger. As Eduardo puts it: “We were molding burgers in different places! We created a WhatsApp group where we exchanged pictures, headlines and thoughts. It was a pretty fair and balanced process. But then some amazing pictures started coming in from Sweden.”

Yes – although there was art direction input from David and conceptual suggestions from Publicis, the burger that stars in the final work was crafted by the team at INGO. It was nothing if not painstaking. “The biggest challenge was to make the mold grow in a beautiful way,” says Bjorn. “Most people think it’s just about putting a burger in a box and waiting. You can do that, and it will grow mold, but not in a way that you can use in advertising. We had to experiment with many burgers.”

Finally, in a secluded corner of a photography studio in Stockholm, the ideal mold began to bloom. “It didn’t actually happen in thirty days. Most of the burgers failed, but after about two and a half months we got the hang of it.”

The time-lapse film that’s the most spectacular iteration of the idea emerged at the last minute. Originally “The Moldy Whopper” was destined to be a print and outdoor campaign. “But while we were taking all these photographs, we suddenly realised, ‘Hey, we could make a time-lapse film out of this’,” says Bjorn. “So we put all the pictures together. And it looked terrible.”

After a discussion with Fernando, the team decided to photograph the whole thing again – this time in the conditions of a film shoot. The end result is not a speeded-up film, but stop-motion animation. “The whole thing is a series of photographs. But we still wanted moving images in there, so somebody in the production team came up with the brilliant idea that for every shot, you turn the burger a couple of degrees. When you put the whole thing together, it looks like moving images. But it’s not – it’s still photography.”

As the launch date for the campaign neared, Bjorn grew increasingly nervous. “I think you always are when you work on something so different. It happened to me with ‘The Swedish Number’ too. So maybe when you’re nervous it means you’re onto a good thing.”

The campaign was unveiled in Scandinavia and then rolled out across the world, as each region launched the preservative-free Whopper. Brazil was the very last to air the work. In terms of advertising history, it’s likely hat there will be a before and after “Moldy Whopper”.